Bang, thump, scrunch, pound; the sound of cogs and pistons operating continuously as machines work around the clock without stopping. The constant hum of an industrial plant is ever present as we’re introduced to Rupture Farms, a meat processing plant on the planet Oddworld. Squeal, slam, sputter, squish; the unfortunate cattle being prepped, processed and packaged, not to be seen again whole until lining the shelves of the local market. Scrab cakes, Paramite pies and Meech munchies, the three major tasty treats produced by the corporation and it’s soul source of income, are now quickly running out with Meeches already extinct. Profits are plummeting and Mullock the Gluckon, head of the corporation needs something new, something different…something tasty. 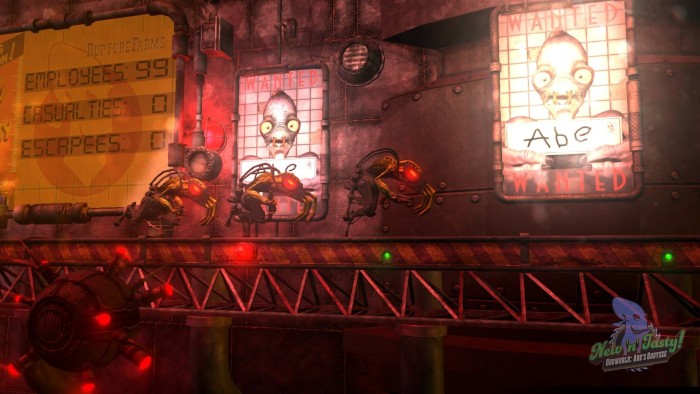 A Mudokon and slave to Mullock, not to mention First class floor waxer and employee of not only the month but year, Abe is happy and content working for his keep in Rupture Farms, well wouldn’t you if you knew you’d be thrown to the Scrabs for sport or used as targeting practice for the Sligs. Curiosity seems to have killed the cat but in this instance the poor Mudokon is on the receiving end. Abe stumbles by a corporate meeting while working late one night, he finds out that this new and tasty treat eagerly awaited and anticipated by many, is him. “Mudokon Pops Coming Soon” the poster reads. Rather than hang around and be turned into a scrumptious profit making delicacy Abe realizes he must escape the plant and in doing so help free his fellow Mudokon workers get out too before they become the chefs new ingredient. Abe’s odyssey and heroic quest begins here.

From the dank dark and almost horror like environment of Rupture Farms to the luscious and scenic areas of Paramonia and Scrabania, the player immerses themselves within this two dimensional platformer. Puzzles and challenges await us as we take on the role of Abe, our hero. It has an easily navigated opening menu screen which gives the player an idea of the games simplistic nature as we are guided through each click by Abe’s floating head in the center of the screen. 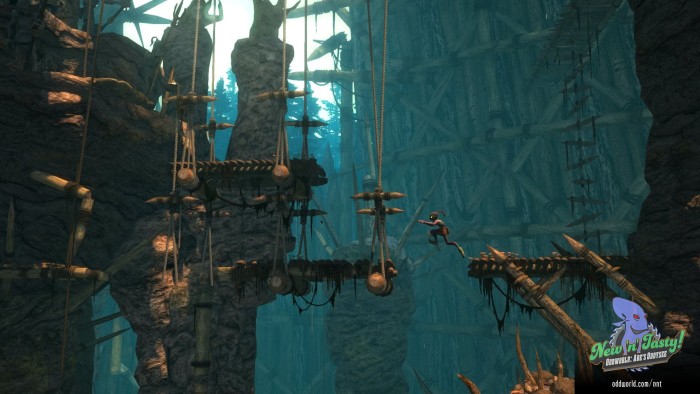 There are 99 unfortunate souls unaware of their fate scattered throughout the game, 99 future popsicles in need of saving. Abe is a guide and through simple commands like “hey” and “follow me”, each Mudokon we come across do just that without question. Guided to a flock of birds hidden somewhere in each level Abe’s na-nu na-nu chant turns them into a portal for the slaves to escape through. Simple yes?, well if simple was not getting shot at by the dreaded Sligs, not getting crushed by falling meat, avoiding the chance to be blown into a thousand pieces by grounded or floating mines or even becoming lunch for the Slogs, then yes this game is too simple. Many challenges await the player throughout, each requiring some thought. Abe is also gifted with telekinesis which the Sligs are quite susceptible to. This can make for some fun situations as when your done with each Slig you can dispose of him by using the games environment, or simply blow them up from the inside. The game is not too short and is it too long, so it never feels repetitive.

To Round It Up

Oddworld: Abe’s Oddysee was originally released in 1997 for the PlayStation, Microsoft Windows and DOS, developed by Oddworld Inhabitants and published by GT Interactive. This 2014 remastered version was given the title New’n’Tasty and was remade from the ground up. For me this game is a classic and to have a remastered version of it seventeen years later after its initial release is, well, to put it in one word… Awesome. The original copy sits comfortably on my shelf along with many other classics and this new version takes up a well deserved place on my PS4’s hard drive. The title is available free for the month of March on PlayStation Plus, so do yourself a favour and check it out!