The Deer God releases tomorrow on Xbox One, we had the opportunity to take a look at this version prior to release. The Deer God originally released on PC last year after a successful Kickstarter campaign. It could be described as a platform adventure game, but that doesn’t really give you the full feel for what this game is.

As the story begins you, a hunter, shoot a young deer. You are then killed yourself by a pack of wolves. The Deer God confronts you and gives you a second chance to redeem yourself for your actions. The only catch is that you will have to redeem yourself as the deer you had previously killed. The Deer God states that you only have a limited time to do this, but this seems more like a story limitation rather than a gameplay one.

The Deer God is a presented rather nicely as a 2D pixelated/3D hybrid, a style which a lot of games have been using lately. The difference is, this one looks stellar. The lighting from the day & night cycles turn the pixel art into a thing of beauty. The music by Evan Gipson blends so well with the imagery you will find yourself, at times, staring at the screen. I can see myself turning this on again and again, to relax between titles with heavier subject matters. It’s an easy game to jump in and out of in small bursts. 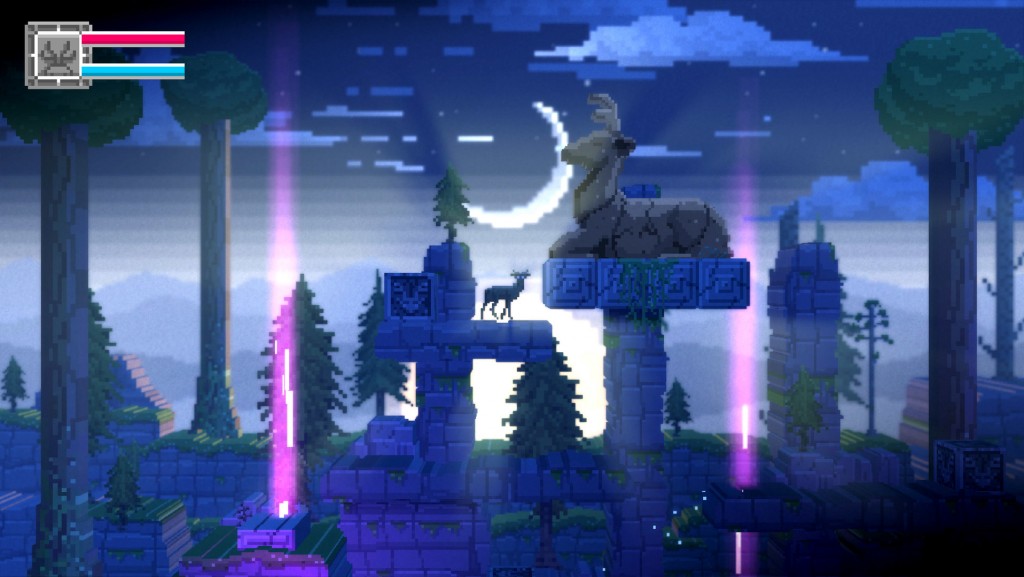 There are several gameplay elements in TheDeer God, but the key element is the platforming. The character movement has a very tight control scheme. I always felt that I had full control of the character at all times. Precarious jumps over spiked pits were hardly a worry, once you could see them. When you couldn’t see them though, it was a 50/50 chance as to where you would land. Since the game only displays a set amount of the world, large drops could see you falling to your doom.

Combat against other animals and humans was quite interesting, as you have a multitude of offensive attacks at your disposal. For starters you have a dash attack that does minor damage to enemies (and friends), alongside several special abilities that do larger amounts. It would take too long to list all the abilities and items you can use to attack, so I’ll just mention my favorite one, the fireball. You gain the ability to shoot a fireball from your antlers, and it’s great. It does a lot of damage and can kill enemies quite quickly, the only catch to using it, is the resource management system.

In the game you have three energy bars, they represent health, hunger and energy. You need to keep your deer fed, lest the hunger consume your life. Having a full hunger bar also gives you health regen. It’s not too difficult to keep this bar full, as food is plentiful in most areas. The energy bar replenishes itself quite fast but the speed seems reliant on your hunger bar being full. The management of these bars is where all the difficulty in the game lies. Once you keep the bars full, you’re pretty much unstoppable. You can run away from any enemies that are difficult. To be honest, you can pretty much avoid all enemies bar the bosses. 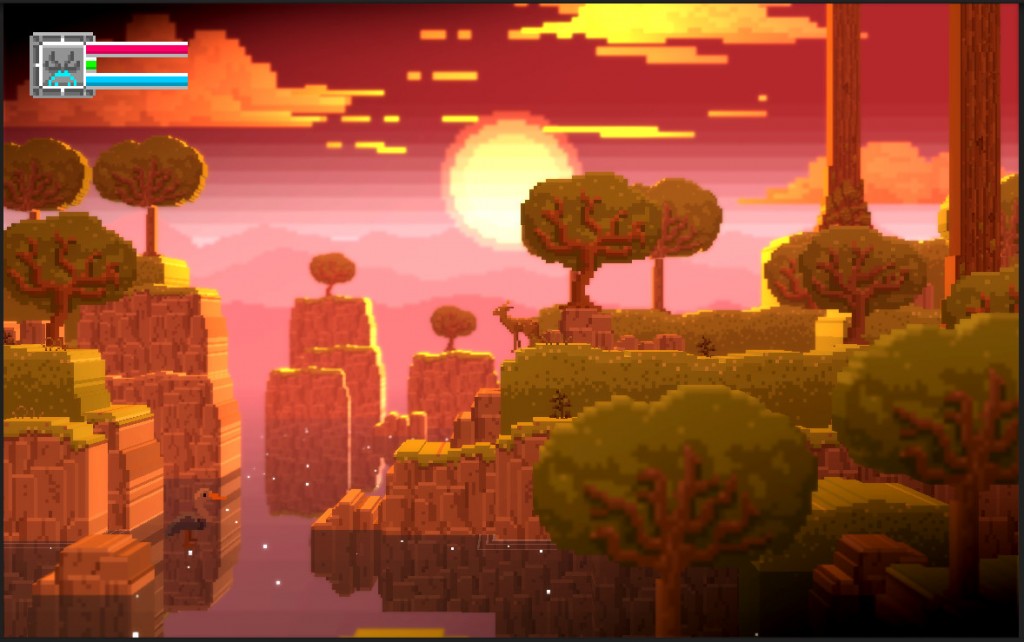 Without giving too much away, the boss fights are pretty much giant enemies that have very specific methods of taking damage. While playing through the game, they were a breath of fresh air from the norm. This brings me to the negative aspect of things… the norm, can get very repetitive. The screens are procedurally generated, but I found myself encountering the same screens again and again. Most quests consist of bring X item to X character. If you have to find the item on the way, things can get messy. One of the earlier quests has you finding an item for a mother to cure her kids, this would have been fine if the item didn’t take half an hour to drop. I believe I looped past the quest giver about 10 times before I got the item I needed and could move on. This repetitive gameplay encourages smaller gameplay sessions, keep going too long and you may get burned out.

To sum it up, The Deer God is a beautiful little indie game with tight gameplay and a fantastic soundtrack. The procedural generation of screens can cause segments of the game to be padded out a bit too much. The title be available free as part of the Games With Gold service for the entire month of September. If you have Xbox Live Gold I recommend you download the game and give it a shot. If you don’t have Gold and side scrolling platformers are you thing, then this would be a good purchase. If they’re not your cup of tea, check out some videos online, maybe the visuals will sway you.

The Deer God releases September 1st on Xbox One. The title will be available free for the month of September as part of the Games With Gold service. The title is also available on for PC.