For the past year Nintendo have insisted that they were not entering the mobile gaming market, that they had no intent to expand the reach of their IP with smartphones. This is about to change, Nintendo have announced a partnership with DeNA, that will see Nintendo branded titles on smart devices. The two companies will also be developing a new multi device membership service for consumers worldwide. Unfortunately you shouldn’t expect your favourite Nintendo titles ported over though, the new games will be developed from the ground up for mobile.

With the global smartphone penetration and the multi generational appeal of the Nintendo Brand, this is a move that is sure to generate a lot of interest. Nintendo have stated that all of their IP will be eligible for development, so it wouldn’t be too far fetched to expect a new Pokémon or Zelda title on your smartphone in the future. 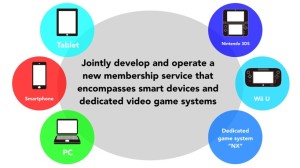 During the media briefing for this new parntership, Nintendo also announced their new gaming platform codenamed NX. It will be a dedicated game system with a brand-new concept. Details on the new system were sparse, so we are unsure what exactly this new platform will be. It is unlikely that it will be another handheld console as Nintendo has only recently released the New 3DS. More details on the console will follow in 2016 for a presumed 2017 release. This would result in a short lifespan for the Wii U, but it’s diminishing sales in the wake of the PS4 and Xbox One launch may have forced Nintendo’s hand.