Freedom Wars is set in a dystopian future where humanity has almost run out of natural resources and the race are forced to live in great city structures called Panopticons. You play a character known as a Sinner, because you have been deemed almost worthless to society. You are sentenced to one million years of hard labour, and are tasked with lowering the sentence by completing missions thus proving you contribute to society. 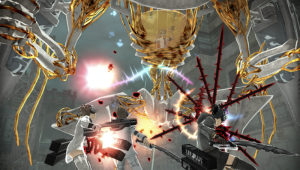 At early stages of the game you have very little human rights, and can even have your sentence extended for something as simple as lying on your bed or taking more than five steps in your cell. You can purchase rights by spending points earned from missions. The feature is interesting and makes the player feel part of the world, however once you have purchased a few of the basic rights, it becomes less of a feature in the game, which is a little disappointing, but arguably makes gameplay less tedious.

The missions themselves are repetitive, usually destroy all enemies, save all citizens or capture all points, but despite this, the nature of the upgrade system and the types of enemies you face can make the repetition very rewarding and satisfying. Particularly fights with large enemies known as Abductors. A mechanic introduced into the game means you will often find yourself using grappling hooks and meelee weapons to sever components from the Abductors in order to destroy them piece by piece.

The gameplay is also ideal for players who want to play in short sessions, covering fifteen to twenty minutes but good enough to retain their interest for hours if they have more time to play. Perfect for a short bus journey or an evening of gathering components for upgrading weapons. The weapon upgrade system is simplistic yet can be complicated if you want to get the ‘perfect’ weapon. They are upgraded by using materials or mixing old weapons with new ones to increase power, similar to how Monster Hunter games work, changing to advanced types of weapon depending on materials. They gain modules that have special effects, which are semi randomised and while they can be influenced, they cant be perfectly manipulated as the game auto saves when the weapon is modified.

The games co-op multi player is a must, if you want to get the most out of this game. There are large scale post game missions that just can not be completed with the help of the AI. You will need help from a versatile team of up to four players to disable, cut, freeze or distract screen size monstrosities, all while healing and reviving each other. Luckily each player comes with one AI accessory character giving you an effective party of eight. 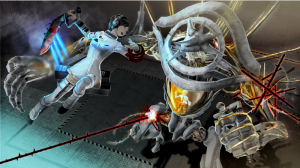 Freedom Wars graphics are easy on the eyes, but nothing spectacular. Backgrounds are a little bland but it could be noted that the world is in ruins so this could be forgiven. The monster design is impressive but there is excessive use of pallet swaps to create advanced versions of enemies you have already defeated in the game. You don’t tend to notice lag or screen tear often, except when playing online or when using the thorn, the grappling-hook device used to cling to enemies and walls, on a moving target.

The games music is catchy and repetitive. It fits the style of the game, but you could easily turn down the sound, play your own music and not miss out on much. In fact, the constant notifications from your AI partner or PA system in your HQ can become very annoying. The voice acting is entirely in Japanese and background announcements are not subtitled.

The game has high replay value, considering end game multiplayer missions and farming rare parts for stronger weapons can be quite fun, because of how they are harvested by dismembering the Abductor enemies.

This game would be recommended for anyone who owns a PSVita, even if its not normally the type of game you play. Its versatility makes it good for casual players but has just enough features to appeal to core gamers.