“Our father, who art in heaven, hallowed be thy name, thy kingdom come, thy will… be done”. In a deep and gritty voice, the opening trailer of Gun plays out on the screen. Impressive CGI animation introduces us to an authentic and lawless wasteland, as the story’s main protagonist, Colton White rides his horse at breakneck speed, firing his six shooter at a group of bandits.

This game, is possibly one of the most enjoyable games to have been released on PS2. It had many merits in and I think the only thing that kept it from getting a sequel was the games title. The name didn’t have selling power, it didn’t suggest anything, and people may have passed it by because of this. 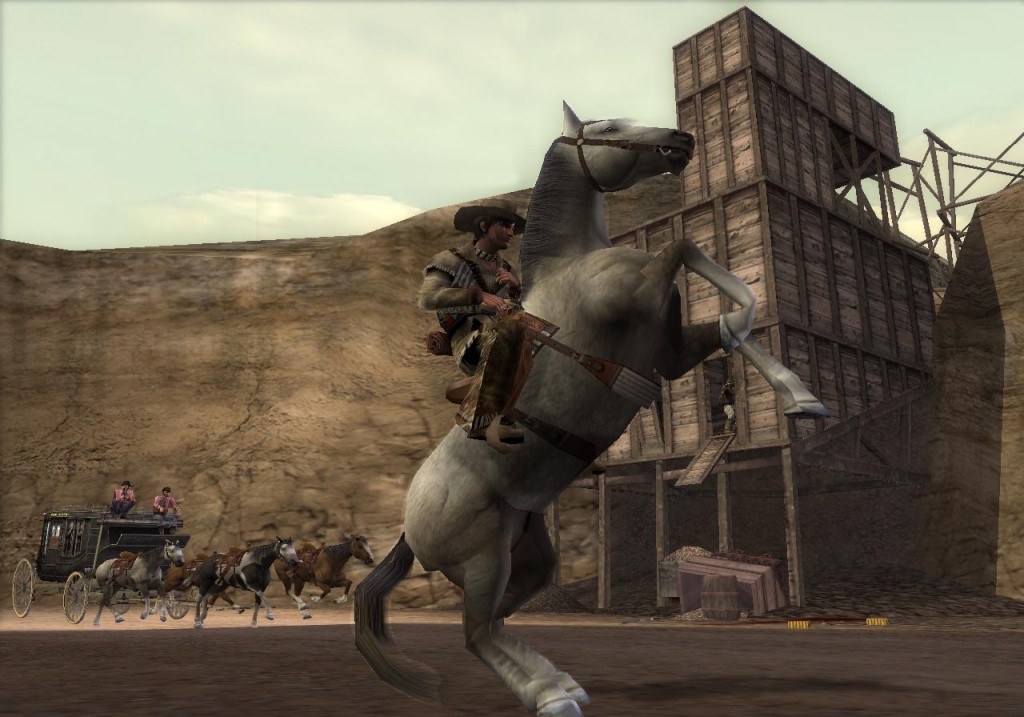 The story introduces us to Colton a hunter on the frontier and his adoptive father Ned. The player takes control of Colton and is thought how to hunt by Ned and together they bag a grizzly. They bring their kill aboard a riverboat, on which Colton comes across a sinister preacher. It must be said, there is some very good voice acting in this game, this preacher really makes your skin crawl, you can really feel the grit and grime you expect from a good western. Meanwhile Ned is off talking to a woman that Colton doesn’t know. Suddenly the boat is attacked and the games first proper combat begins. Ned does not survive the encounter and the boat is sunk, leaving Colton at the edge of Dodge with one thing on his mind, revenge. From here on he will be involved in bar brawls, shoot outs, poker tournaments, jail breaks, cattle wrangling, protecting stage coaches, taking down wanted bandits dead or alive an so much more. The story has some very good plot twists, and as I’m actually recommending this game, I won’t go in to them here.

The combat in this game is a generous mix of third person shooter and first person shooter. You are armed with your six shooter, rifle, shotgun and other story related weaponry. A simple cross hair helps to target enemies and animals, who will be out to kill you and the AI does a good job at challenging you. You have to option to slow down time in first person view for a few seconds while a meter is depleted, to help get rid of a larger crowd of enemies. This is a feature that was used in a lot of games around the time of Gun, so its nothing special, but man it is satisfying to get that perfect head-shot on an enemy who’s been giving you trouble. If you have low health, you can gain some back by having a shot of whiskey, that was a nice touch. 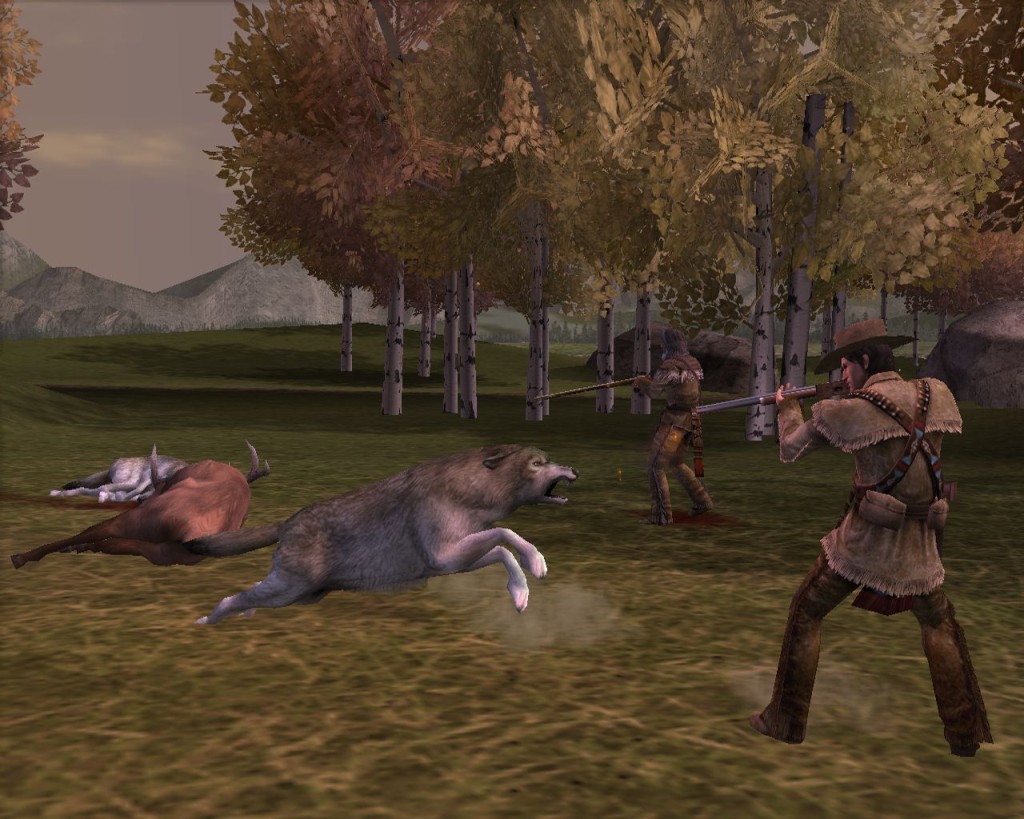 The game is a free roaming world, stretching from Dodge to Empire City, and you can go pretty much anywhere once you have passed the prologue section I mentioned above. This includes night and daytime missions, which show off the scenery under different lights and an open starlight sky. You can partake in many of the mini games and side quests such as poker and mining for gold, earning you cash for decent upgrades. Better weapons, more health, faster horses, there’s a fair bit to choose from, even if it is a little bit standard.

The games music track is the perfect compliment to this game. The main theme will stick with you after you’ve played for a little while, it just works. The games graphics were average, or slightly above average for the PS2. They don’t look so good compared to anything available today, but they were easy on the eye, did give authentic looking scenes and effects and not many rough edges or unmanageable screen tear. The game did lack a little bit in CGI movie clips, there were some at pivotal moments, but not many, although the story did move forward fluidly without them. 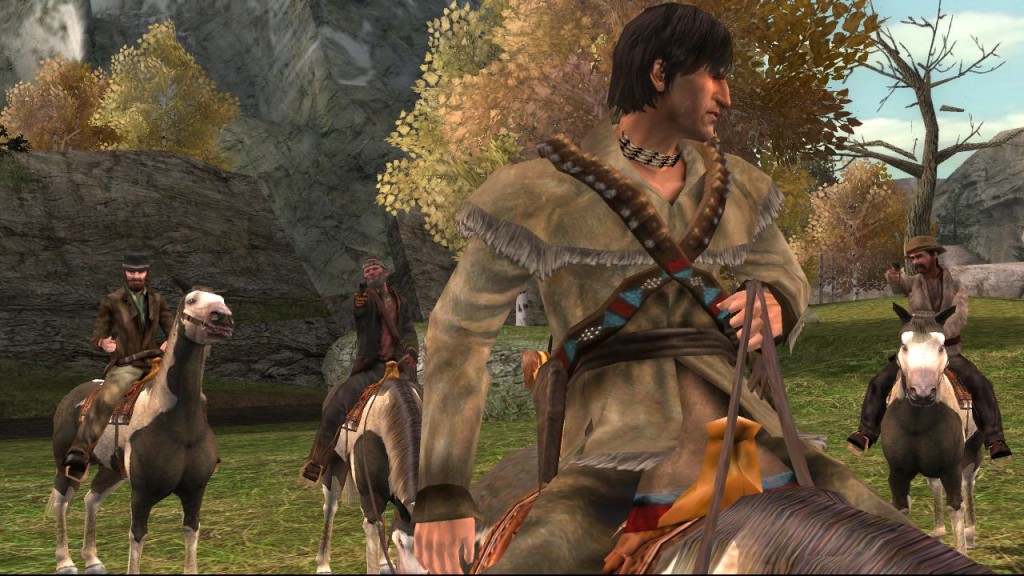 Gun arrived on the PS2 around the same time as Red Dead Revolver, which spawned Red Dead Redemption. Oddly enough, Gun was a lot more like Redemption, with its free roaming gameplay and story,  than Revolver was with its level based, loading screen riddled gameplay.

It’s worth hunting down a copy of Gun, for the story or for the gameplay. As a recent enough retro game, you should be able to find a copy cheap before it becomes scarce. The Psp port is also a good option, you get the full story with some added features.