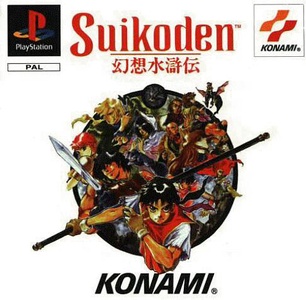 In terms of game play, Suikoden is all about the story. If you want to experience and old style 8 bit JRPG and haven’t got the time for or want an alternative to the Final Fantasy series, Suikoden is the perfect choice for you. It manages to fit an epic story into a small world map, in this case, a few towns and cities surrounding a lake that is part of a much wider world, explored in later sequels. The story is fast paced and keeps the player interested, even if the plot twists are a little predictable, and like all stories, does contain a few loopholes. The story is enhanced by the musical score that accompanies the game, that really compliments the tension or emotions conveyed between characters in each scene.

The game play is very basic. The player controls a team of up to six characters at a time, at certain points in the game, the characters that take part are predetermined by the story. The combat is turn based, with attack order decided by the characters speed stat, while a basic magic system is governed by attaching Runes with special properties to characters. There is also an interesting command in combat known as a Unite command. Depending on which characters have been chosen by the player, special combos and animations can be used that devastate the enemy parties, these combinations aren’t always obvious, so some experimentation is required.

There are 108 characters in the game that will (or can) join your cause, and they each have their own back stories and will effect the course of big battles you can take part in, as well as how the game ends. These major battles involve two armies facing off against each other in a large scale rock paper scissors style battle featuring archers, magic and cavalry, similar to a few duels one on one between key characters at pivotal story moments in the game. The games upgrade system is also pretty simple, earn experience to level up, and sharpen your weapons at blacksmith for cash.

One of the drawbacks to the game however, is the limited inventory system. Characters can’t carry much and there is no shared inventory apart from a vault in your HQ. It can become tedious swapping items around characters just so you don’t have to leave anything behind.

In terms of difficulty, the game is actually very easy. As long as you don’t run from any battles, you should be leveled up enough by the end of an area to finish it without much grinding, with the exception of one or two bosses early on in the story. If you revisit an old area and don’t want to fight weaker trash, you can just choose to let them go.

The graphics in this game are of the least importance. The world is a backdrop of 8 bit sprites, and while its easy on the eyes, don’t expect a work of art, it can be a little ugly or plain at times. The story more than makes up for this however, and with the digital re-release of the game, you can play it on a PSP or PSVita, which makes the graphics feel more appropriate. Because the game is short and links in with sequels, it has some replay value, if you like the story. If you want to try a JRPG and you don’t have the time to invest over 20 hours, then this is the game for you.

The game was re-released this year thanks to the pressure fans of the series put on Konami, the games developer, and talks with Sony. The fanbase, known as The Suikoden Revival Movement can be found on Facebook. They hold competitions and events, currently they have a Suikoden art competition running for the PAL region in collaboration with Konami.

The digital edition on available on the PSN is well worth a look, currently reasonably priced at €4.99, considering a hard copy of the game would have set you back upwards of €150 only a few months ago.