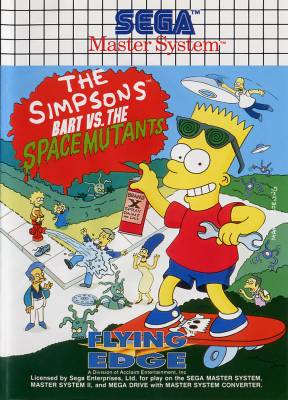 There have been many many video games based on TV and Movies. While the current run of games based on shows (Game of Thrones, Walking Dead) seem to be doing well, unfortunately the same can not be said about most games from the past.

Today, I take a look at the Simpsons first outing into the video game world. Nowadays, if something exists, there is Simpsons merchandise of it, but back in 1991, the brand was still gaining credibility and I was excited to get my hands on a copy of Bart Vs the Space Mutants.

The game boasted that space mutants were going to create the ultimate weapon, and only you, Bart Simpson, with the help of your x-ray specs, could stop them. Enter level one, a gaudy green and red background for your little yellow stick figure Bart as he begins the platformer of his life, to the repetitive 8-bit tune, that will not only get stuck in your mind, but also make you want to chew your face off after five minutes of the game. It tries to fit in with music from the show on the first level at least, but it just doesn’t work.

You see a space mutant at the very start of the level, bouncing around a purple bin. You decide to jump on him, like Mario or Sonic would, you’re used to platformers right? And… you’re dead. So you cant jump on the enemies, and there’s lots of them around, you can only avoid them, tedious work for a child, the clear target audience for this game. Through some random combination of buttons you figure out you can use the x-ray specs to distinguish other space mutants who have disguised themselves as characters from the show (mostly just Skinner really). When revealed, they look like a slightly spikey version of Skinner. You can jump on their heads to gain money, the use of which isn’t clear at first. I should point out it doesn’t make sense that the aliens are disguised as people when there are like fifty of the bloody things just hopping around and completely invincible in broad daylight. Seriously, how did nobody in Springfield notice this?

Literally everything is harmful to Bart. I could go on with a whole list of things that are fatal to you, but sure just think, some of them include, there are killer candy canes that look like floating blocks of death, random multi-coloured hoops (of death) and a handbag (of death).

After dying multiple times trying to get to a badly drawn picture of what one can only assume is supposed to be Krusty the Clown, you find it only serves to give you one extra life. You also find out that the aliens have set you a boring task, every single level of the game. In the first level you have to turn all purple objects red, you need money to buy spray paint, bottle rockets and other things to do this. If you run out of money, you cant turn all objects red, you can’t get to the end of the level and you do have to reset and start over, great idea right?

The second level has you knocking hats off people. You will die a lot, because most of the people are not space mutants in this one, and if you jump on a normal persons head, you die. The theme is repeated through all the levels. You can also collect family members names during the level which will have one of the Simpsons help you with the boss, who oddly enough isn’t one of the space mutants, rather one of the supporting cast. 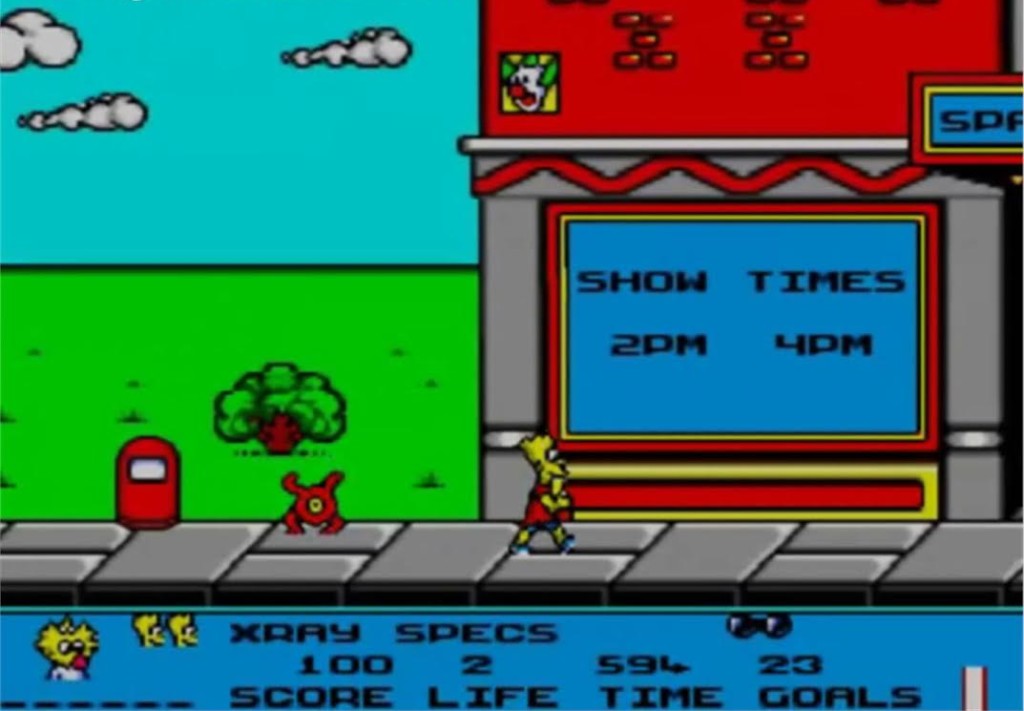 To be fair to the game, there was some crossover with the show in regards to the bosses. Nelson bullied you with cherry bombs. The evil babysitter dropped bags on you (for some reason) and Side Show Bob’s weakness was his feet, so at least there was that.

There was also an interesting attempt at mini games in some levels, which were actually a good idea, but not executed very well. Usually you would earn extra lives, say for jumping up five screens high, then stepping off the edge of a platform and falling onto a buzzer that would ring a hammer and bell.

Actually kind of scraping the barrel for positives here. The gameplay is frustrating, the music is repetitive, the story is pointless, the graphics gave me a headache, a feat in itself considering I normally enjoy old 8 bit graphics. This is not a fun game and doesn’t offer much in terms of replayability.

I have only bothered to get to the last level once, and for some reason, the last item I was to collect was glitched and out of reach. Other ports of the game were not as glitchy and the enemy placement was a little different depending on the console. But really the main feature of this game is; “Hey, at least its not The Simpsons: Barts Nightmare.”