Bloodborne is one of the biggest titles we will see on the PS4. Released a little over a year after the PS4 was launched, I can say the game was well worth the wait. Readers will probably know that the game was made by From Software, creators of the Soul’s games series and that there are some similarities between the two. Taking a look at Bloodborne on its own merits and its easy to see what makes this game so interesting.

Players are absorbed into the mysterious and creepy Yharnam, a dark and vast city with Gothic architecture similar to that of Victorian London. Straight away you can see the attention to detail waking up in a doctors clinic, as terrifying creatures perfectly rendered claw their way up your body. With a splash of blood, you have begun one of the most challenging, frustrating, satisfying and fun games you will experience on the PS4.

The story is literally filled with lore, dark and sinister characters, it keeps you thinking, from the start to the last. To avoid spoilers I won’t say too much on the story, but if you like dark, mysterious horror that’s a little twisted and macabre, this is for you. I can not fault the way the events of the game unfold.

The games graphics are crystal clear, sharp and horrifyingly realistic. It was rare to see any screen tear or lag, and you have decent control of the camera angles. Occasionally your view can be obstructed by something like a giant boss monster, but that just allows you to see the sheer detail that went into the creatures design.

You set out from the clinic and begin your first taste of combat. Using a variety of ‘trick weapons’ special weapons that transform, you must tackle hordes of mutated beast men and vile creatures. The trick weapons are really fun, and make the give you a versatile choice of how you want to play the game. Personally I chose the cane weapon, which doubles as a whip, because I tend to go for a bit of range and mobility in character. But had I wanted to dish out massive damage there are many options ranging from giant hammers to spear guns, there is something for everyone.

Combat can be very tricky, you can play defensively but the game rewards the risk taker. This was something new to me, as normally I tend to be more cautious, but I liked the change, it kept the game interesting. Once you get into a rhythm of dodging, parrying and countering, the game becomes a little more manageable. Killing a few enemies rewards blood echos that can be spent to upgrade your character and weapons. Its a nice easy concept if you haven’t played the game before, but mistakes are still punished. If you die, you will loose any blood echos you were carrying and to make matters worse, enemies can now pick them up after you die, leaving you at risk of loosing everything to a monster with a one hit kill. It’s a little frustrating at first, but more of a challenge than an annoyance.

The game really gets a good mix in with the boss battles. We’re used to seeing giant screen sized monsters as your standard boss in games these days. Bloodborne changes this a little bit, you get giant beasts that you can literally tear the face off, but then come across small human sized foes that can wipe you out with a well timed gunshot and axe chop. You really have to plan your stat upgrades and tactics to keep ahead of what the game can throw at you.

Multiplayer in Bloodborne is a strange and fickle thing, but so much fun when you have help tackling the horrors of Yharnam. Players can contact each other by ringing a series of bells at the same time to join the fight against a boss or particular area. This also allows for PVP combat, which I have only experienced a few times, but seems fairly balanced and free of exploits. If you want to play with friends online, you can set up a private password for joining the games. The only drawback I found is that the person you are trying to summon has to be within ten levels of your own character, which can potentially lead to you waiting a long time for some much needed assistance.

Bloodborne also features its own type of special dungeon, known as a chalice dungeon. These are unique dungeons, generated randomly for the player, and they are tough. At deep levels they can yield some of the best rewards in the game, but not easily won.

The games music and sound effects are creepy, eerie, unnerving and completely fit in with the atmosphere and setting of the game. The quality of the voice acting is quite decent, I have yet to discover an NPC with a voice that I hate. On that note, the game has major replay value, boasting a world of secret locations, optional bosses and NPC quest lines, there is life in the game after the main stories death. One word of caution though, if you defeat the games last boss, you will automatically be sent into NG+ mode and not be able to complete any outstanding side quests. The difficulty of the game scales quite a lot, and there may be fewer players around to help you when you start ringing that bell. I like the challenge of NG+ but think there should be an option as to when it should commence.

There is also an area in Bloodborne, which is a potential game killer. In a non-disclosed area, monsters will automatically respawn, and not offer any extra blood echos. There are a lot of them and it can be extremely frustrating. Its hard not to give up on the game at this point, but keep at it, you can do it and the following battles and scenes will be worth it in the end. This was probably the only thing I disliked about an otherwise excellent game. 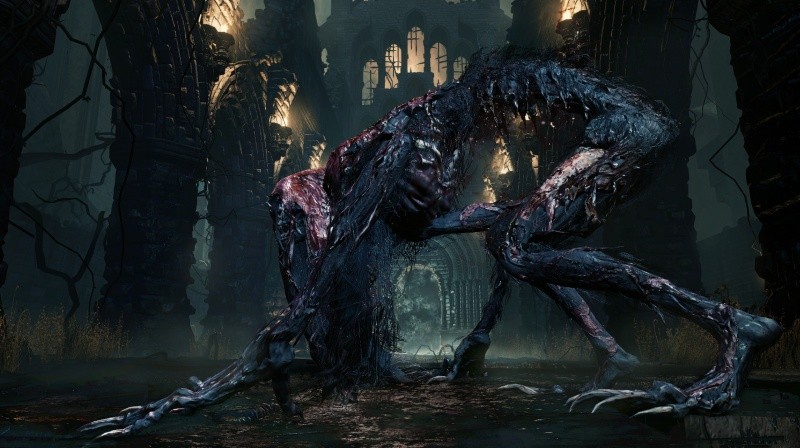 Bloodborne gives the gamer a rewarding and satisfying challenge, something that is really needed in the current generation. The story is dark, intriguing and a little on the strange side, but accompanied by a perfect soundtrack and realistic imagery. It has high replay value and can be really fun. There are one or two parts of the game that are annoyingly frustrating but can be overlooked for how good the rest is. Multiplayer is good, but the range of levels for matchmaking would be better if it was a little wider. Avoid this game if you do not like a challenge, are easily frustrated and don’t enjoy a bit of trial and error investigation, however if you own a PS4, and any of what I’ve covered appeals to you, you should definitely buy this game.