After playing Streets of Rage and the Scot Pilgrim game recently, I had an itch for an arcade style beat ’em up platformer. A friend reminded me of Comix Zone, that gem of a game for the Megadrive, or windows 95 if you prefer. I had played it on both platforms and remembered it was a fun game, although I was not quite sure if that was just nostalgia or if the game lived up to my memories. Deciding to give it a try, within moments I discovered that my nostalgia did not disappoint. For the type of game I was searching for, this one hit all the right spots.

The story of the game follows Sketch Turner, a comic book artist who is working on a new story called Comix Zone. Lightning hits his comic late one night and the evil villain, Mortus, a powerful mutant, escapes from the comic book into the real world, trapping Turner inside the comic. Sketch traverses the cleverly designed levels, fighting mutants and his own creations, while receiving instructions from a woman who thinks he is a super hero. 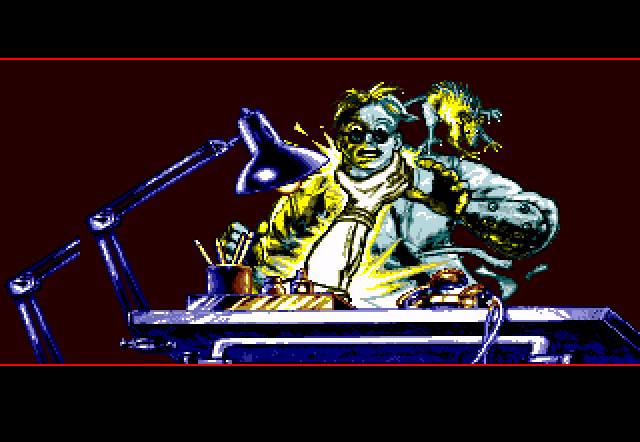 The levels are really really colourful, laid out like the panels of a comic book, that sketch must leap from, break through, smash through or tear down in order to progress. His sprite is prominent on screen, and you can see all the details of each combo and attack he executes. The combat animation actually rivals Streets of Rage and Golden Axe, if you can get a good combo down, its a lot faster and more like an arcade fighting game. A jump kick or flying kick from Turner looks impressive for a comic book sprite, particularly in comparison to the same move preformed by Axel in Streets of Rage.

The enemies are imaginative, from freakishly weird and alien to menacing mutants, there is a definite cheesy comic book appearance off them. You have to handle each enemy differently, some will fly at you, others can teleport or disappear into sludge, keeping the action going.

There is always a lot going on in each frame, a wide variety of enemies, traps and obstacles await Turner, sometimes leading to effective puzzles or environmental advantages depending on special items he can pick up. For instance, he can use his pet rat, Roadkill, to turn on or off switches, opening gates or disarming traps, as well as helping him to defeat enemies. More enemies are added to the level by Mortus, as he draws them into the comic panels, which is a nice touch, as is the dialogue in speech bubbles. 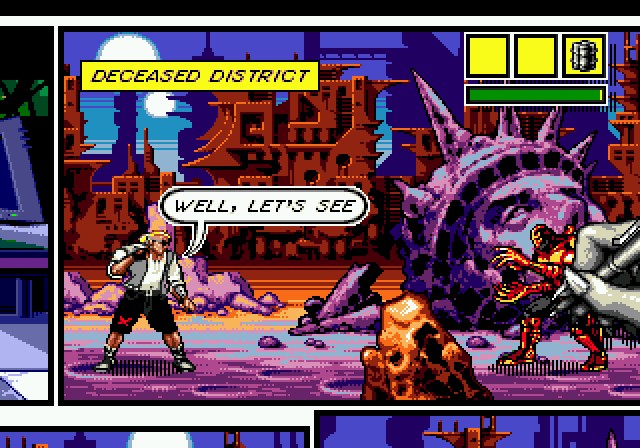 The music and sound effects in this game are very easy to listen to, good quality arcade tunes. There’s even occasional voice acting soundbites that are humorous.

Comix Zone is fast paced and enjoyable. There is always some drawbacks to address, as with any game, and for Comix Zone, it would have to be the fact that there are obstacles that have to be broken to progress the next area. The problem is, hitting them will cause you damage, health recovery items are few and far between, leaving you with a potential suicide situation, and when you die, you have to start over from the very start. The game itself is a little bit short and you can find its almost over when you are enjoying it the most. It also lacks a multiplayer game, which is an advantage that Golden Axe and Streets of Rage have over it.

As an entertaining and short game it has a fair bit of replay value. There are two endings to the game, but they don’t make much overall difference to the fun of it all. This is an ideal game to procrastinate with, maybe a short game before you have to go out or catch a bus. A good game to play while hanging out with friends, as it doesn’t need too much attention, you can chat away, eat pizza, whatever while taking turns bashing some mutant scum.

I would recommend trying this game even just once, if only to appreciate the idea behind it.