What better things to do on a Sunday evening than to hunt down some old Atari stuff. I climbed into the attic and found the old Atari XE hiding away and as I planed to take it down and set it up, I remembered last time I had used it, the power supply had decided to explode and cause the console to hiss and smoke. It was a pity, I had just found an Atari game I really wanted to try again.

Naturally, my only option to bring this game to you, was emulation, and let me tell you, it wasn’t easy. Before games were digital, before they were on DVD, before CD and battery powered cartridge, videogames came recorded on… audio tape. Yes that’s it, you had a keyboard, a TV screen and a tape player that loaded your game, roughly ninety minutes after telling the Atari to boot up the game, if you were lucky. If you were unlucky, there would be an error during loading, you would be prompted to rewind the audio cassette and start over!

I looked at the green tape with faded gilded writing that I held in my hand and remembered many an hour praying to some such deity or other that the game would load. I thank the start that the emulator didn’t try to simulate the whole experience and started up straight away. The game? Phantom, for the 8-bit Atari machines, developed by Tynesoft in the late 80’s. 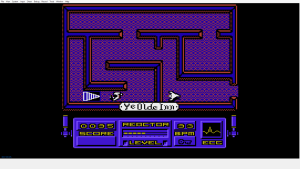 You start of in a garish maze of purple and black, a lone white, block monster pixel, and it is clear you must reach the exit of, “ye olde inn”, which is apparently where you are. There is a score counter on the left of the screen, an energy meter in the middle, and a heartbeat monitor on the right hand side. The heart rate monitor is constantly beeping, showing a pulse above a crude ECG display. The score increases as you defeat enemies, the energy meter is for your ghost busters knock-off energy gun, which blasts out a stream of white pixels to what seems a randomly decided range, and the heart beat monitor is your health, if an enemy touches you enough times, you have a heart attack and die.

As soon as the game loads up, you’re treated to the sound track, lucky you, because its that theme that’s been used in hundreds of shows and movies over the years, usually in scenes where people are creeping around or whatever, I can’t remember the name of it, but that’s not the point. The point is, it plays constantly, on a loop, until you want to stick a fork inside your ear to swirl it around. Thank the world for free Spotify on Playstation 4 eh?

You’ll soon find that each maze has locked doors and you must first collect a key that is in a narrow lane far from the exit. It would be simple enough, but then you realise that you are not alone in this “Olde Inn”, well the games title couldn’t possibly have given it away but you are completely swarmed in a matter of seconds as “ghosts” start to appear and follow you. They are small white block creatures that kind of look like octopus or the unhappy ending of the programmers dreams. Either way, you zap them and run for the key. Just for fun, they respawn and keep spawning until you exit the area, and they will do this, at the start of the narrow alley you were forced into to get the key. 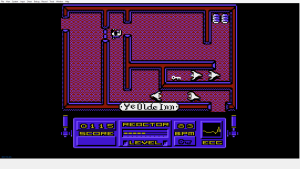 You will also come across big ghosts that will block stairs leading to the next level. They won’t come after you but they will take at least half your energy bar to destroy before moving on. They look a bit like weird white spider octopus hybrids with red blocks for eyes. In most areas you will find weird objects that will refill your health or energy along with some other random objects that don’t seem to do much at all. It’s nothing too taxing, if you can get over constant spawn of ghosts and find ways to conserve your energy it’s playable, but should you die, you have to start over.

For me, this is definitely a nostalgia play. It was novel to play, and it’s nice to possess a game on tape, but if you’re planning some retro gaming from the Atari age, there are definitely better titles. Phantom 8-bit Atari just doesn’t hold up to the fun you can have playing Asteroids, Pac Man or Missile Command. If you just have to take out the old Atari, do yourself a favor, check your power supply hasn’t gone moldy and that you fit it with a new fuse.