EA reveal a new IP under the name Unravel. A Platform puzzler where players play as Yarnie, a character made from yarn. The developer showed concept photos of the character in various scenic locations.

The game looks similar to Little Big Planet, however plays a little differently. Yarnie will have to use strands of yarn to traverse the levels, leaving tangled string behind as he goes. The trailer showed some of the puzzles in action, with Yarnie swinging across caverns, walking in atmospheric weather conditioins and in one scene, catching on to a fish to pull a raft across a lake. 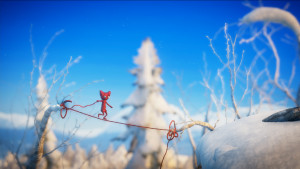 It appears that the player will need quick reaction times, with parts of some levels falling away, like ledges and cliffs. In one instance during the trailer, Yarnie has to avoid a car that appears from off screen, while he is crossing a muddy road in atmospheric rain.

First impressions of the trailer show beautiful and stunning backgrounds, full of life and emotion of the game. The developer made it clear, as he clutched the little yarn figure of Yarnie he had made himself,  that the team intended to make this game with heart and feeling. Based on the trailer, it appears that the team will reach that goal.