I spotted that SMT Lucifer’s Call, also known as Shin Megami Tensei: Nocturne, was hitting the PSN this week, so I decided to power up the PS2 and give it another go. I must say, there are mixed feelings on if this was a good idea or not.

This is probably one of the most difficult RPG’s I played on the PS2, and was quickly reminded of this a short while after starting the game.

You play the main character of the game, a silent protagonist saved from the end of the world as we know it, by a mysterious man who forces you to eat a demon larva, called a “Magatama” that gives you demonic powers. Were off to a crazy start, the world has been inverted, filled with monsters and all humans have become wandering spirits. We’re looking at mad max mixed with some bizzare demon anime.

Your quest is to follow other protagonists and antagonists around the world to see how they will influence “The Conception” the reshaping and reordering of the new world. You, as a demon, are given no say in what kind of world will be created. You will, however, have regular contact with the mysterious man who gave you the demon larva, particularly if you decide to enter the optional dungeons of the game, giving you access to secret endings and special items. 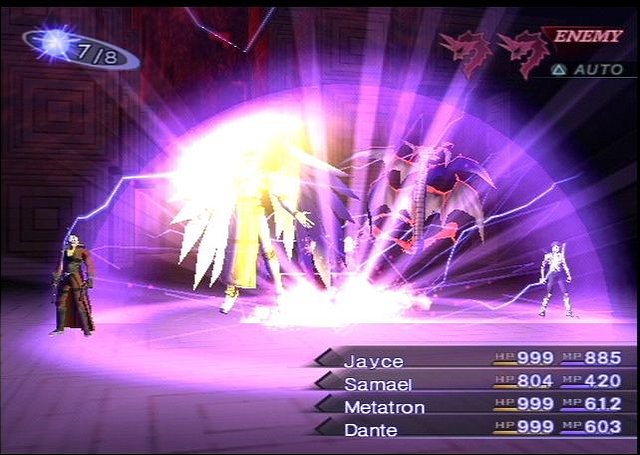 Demons aren’t your only worry in this game though, for barely legitimate reasons, you are hunted by Dante, a demon hunter, set to stop you from doing anything you are trying to do. Dante, that’s not a very original name for a Demon hunter, is it? Who was that guy, oh yeah, Dante, he was in Devil May Cry. Hang on a second, this Dante has two guns, he dropping from a building and tearing me apart with twin pistols… Oh shit, it is THAT Dante. Yep, Capcom were very sporting and allowed Atlus to include Dante in this game. He appears as he did in the second Devil May Cry game, and should you choose to do the optional areas, he will be the bane of your existence.

As I may have hinted, this game can be ridiculously hard, if you aren’t good at typecasting. The combat system is similar to the Persona games, as you could expect from S.M.T, a lot of spells, elements and demon characters are shared between the two. Ingest the wrong Magatama or enlist the help of the wrong demons, and you could be looking at a game over screen very quickly, as an opposite element hit will put you into a knockdown state, you wont be able to take action and can take double damage. An infuriating situation as you can imagine. You can recruit a great many demons to help you fight though, and some have skills that are pretty broken, like being immune to physical damage. You can also combine demons to make more powerful ones, including the special bosses you can only fight in certain areas under certain conditions. If you play this game, save often. In the optional dungeons, you will take damage even before you fight anything, and I came across a glitch where the game would freeze when in these dungeons, be prepared for this. 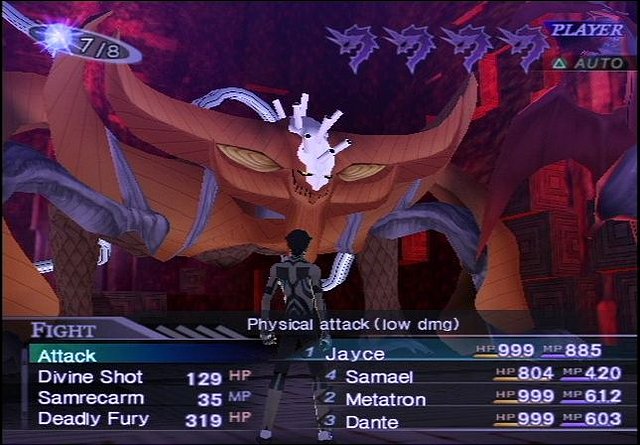 The graphics in this game are not great. There is a kind of anime style look about everything, but most of the models are kind of box like. On the world map screen, you are a disembodied cursor, it doesn’t look great. This doesn’t take much from the game, but the graphics could have been better. Even effects in battle are a bit lack luster, not overly impressive fire and lightning effects.

The games soundtrack is great. Decent music fills the background, in most places, kind of chill. Music to fit the streets and clubs you enter, that doesn’t give you a headache as you play. The sound effects in the game, however, do give you a headache. Combat noises, magical explosions, some shouts and grunts from enemies just sound like they were badly recorded, or in some cases are just plain annoying.

Does the game have replay value, yes of course it does, six endings at least, and if you like a challenge this game is difficult. You may not want to play through it again though, depending how you take frustrating situations and cheap shots this game can fire at you, which is understandable. The asking price on the PSN for the game is fair for what you get, though expect to pay a bit more if you want a PS2 version of the game.

One fun fact I picked up after playing through, was although I had a European version of the game, Lucifers Call, my saved data showed ‘SMT Nocturne’ the US versions name, something to look out for. You can pick up the PS2 classic on you PS3 at this link.

Verdict: If you want the gameplay of the Persona games or the Devil Summoner games, but don’t want all the relationship dialogue or have two hundred hours to play, then Lucifers Call may be just what you are looking for. As always, there are arguably better titles, this one just happens to be worth a look.