Aero’s Quest is described as a fast-paced, challenging puzzle-platformer that takes the best of late ’80s retro gaming goodness, and rolls it up in a delicious contemporary wrapper.

It is definitely challenging, considering this review is based on completing 33/101 levels and an attempt at the speed run mode for an hour or so of game play. The plays a lot like Super Meat Boy. There are some differences, which will be covered in a bit. Right of the bat, where the game is the same as Super Meat Boy is, it thankfully has controller support. I can’t stress this enough, you are unlikely to enjoy this game without a gamepad. You can play with the keyboard if you prefer, but this game was designed with thumbs in mind. I used a wired Xbox 360 gamepad and found both the sticks and D-pad to be comfortable, there didn’t seem to be any input lag.

The game sets you up as a cyborg set out to save your lover from the robot who transformed you and left you for dead. You must traverse a level of deadly buzz saw traps, projectile launchers and blade coated enemies, which is again similar to Super Meat Boy. This time however, you have to step on various pressure plates scattered around the level to open the cage at the end and complete it. Sometimes you are required to use a power up, go through a portal or decipher a code. This adds an extra edge to the way the game is played, and a fifty second time limit adds pressure and challenge to the game, often forcing you to take a mad dash and hope you clear the dangers around you. 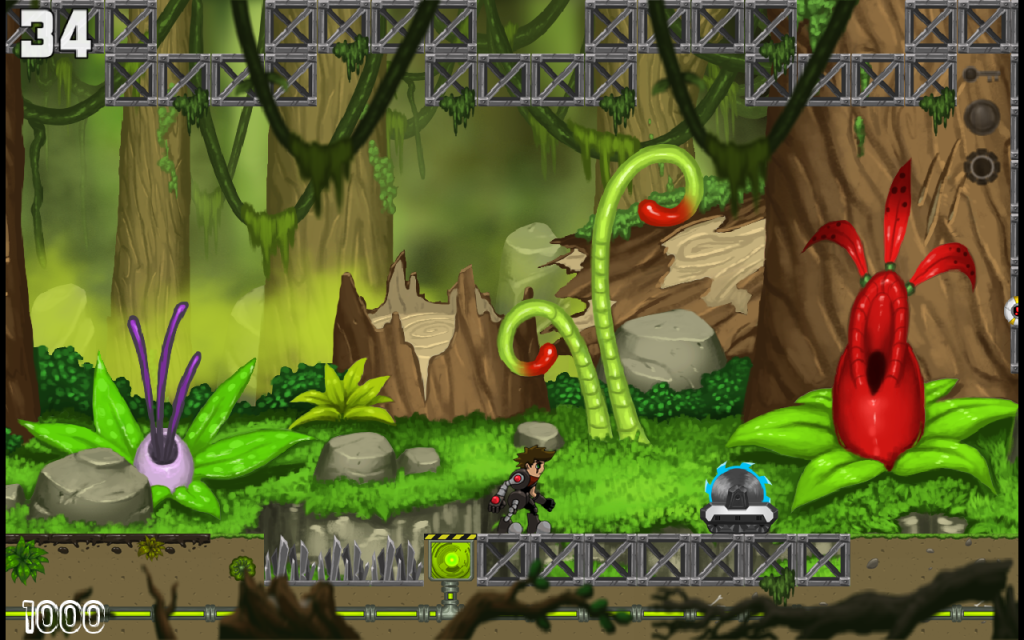 If you are easily frustrated though, some of the projectiles in the game fire irregularly and are very difficult to time, it can become quite irritating. Whats more, some traps are erratic and fire in random directions. If there is a pattern or precise timing, it is very hard to get it down properly due to the time limit imposed. You may find yourself splattered over and over again by one cheap cannon spitting blades at you.

Speaking of splatter, this game has a little bit of a gruesome streak in it. When you die, the screen will be splattered with blood and, or, chunks of your body. It felt a little bit tacked on, as if it was trying to be like SMB. In Super Meat Boy, there is that over the top humor that accompanies the blood splatter, Aero’s Quest doesn’t have that sense of comedy about it. I like gore and violent games, but it just didn’t seem to fit in, considering Aero has become an android, maybe explosions or wires would have suited the scene better.

The games music, is literally give or take. There’s nothing spectacular or game breaking about it. It does have that 80’s retro arcade sound to it though, so if you’re going for that feel, it could work for you.

The artwork is quite easy on the eye. There are some pretty vibrant backdrops and Aero doesn’t look half bad for a side scrolling platform sprite. Unfortunately there is a lot of screen clutter from effects like flames, which can distract the eye. You may find yourself killed by traps that were obscured by screen clutter, considering the placement of them and the inherent difficulty of the game, I would say this is not intentional, so beware. 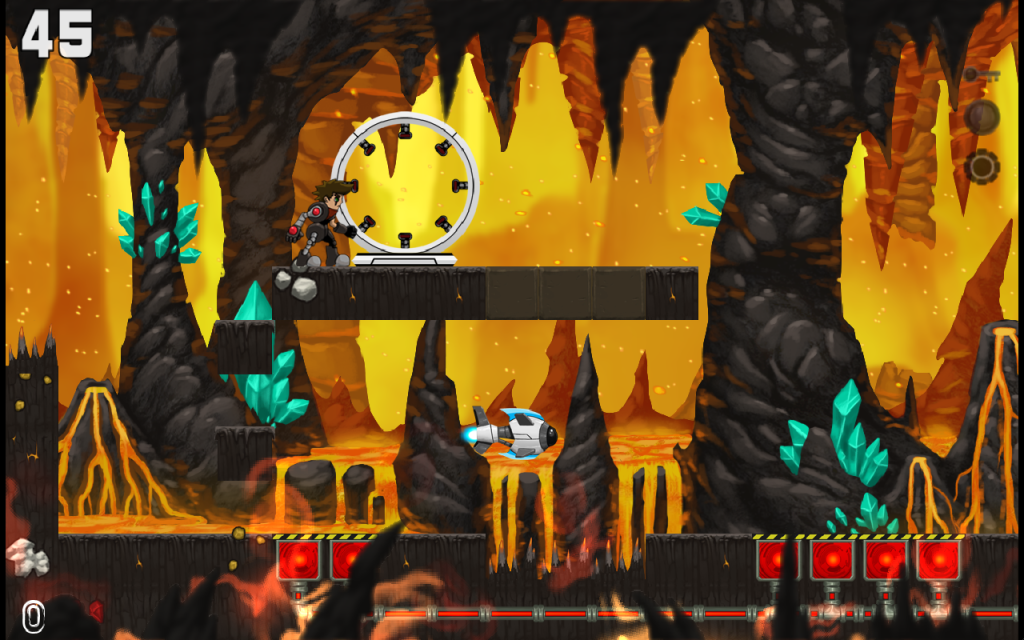 As of the 33rd level, a boss was not encountered. I would personally prefer them to be more frequent and at the moment can’t confirm the challenge level or entertainment value of bosses. The game does feature STEAM achievements if collecting is important to you. An hours natural gameplay should net you around 50% of all the achievements.

Verdict: If you have a masochistic streak in you, and enjoy the challenge of Super Meat Boy, or the old Oddworld games, and have the patience to die over and over again, much akin to a Dark Souls player, this game is right up your street and would be highly recommended for you.  However if you frustrate easily or tend to throw a controller, for your screens sake, choose another title.